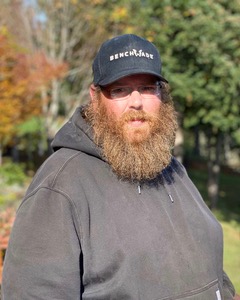 Andy was born Andrew Michael Armstrong on September 5, 1977 (his Grandma’s Birthday) in San Jose, CA. He went to Heaven on December 23, 2019.  He was 42 years old.
Andy grew up in Brookings, Oregon and graduated from Brookings-Harbor High School.  He went to Wyo Tech where he received certification in Auto Body & Paint.  As an Auto Body Painter, he worked in Portland and Medford, Oregon and Phoenix, Arizona.  He also worked summers in Alaska as a Refrigeration Tech and as an Auto Mechanic in Oregon.
He deeply loved and valued his relationships with his family and friends.  His family and many friends tell how he always had a smile and had such a sweet spirit. Even though he was quiet, he was always able to share his great sense of humor.  He never had a bad word to say about anyone.  He lived his life simply which not many people find a way to do.  He is dearly missed by everyone who knew him.
He is survived by his parents, Craig & Helen Armstrong, his brothers, Ted and Travis and many extended family members and friends.
If you desire, donations in Andy’s name can be made to Moose Lodge 178, where Andy belonged, (9713 Old Stage Rd. Gold Hill, OR 97525) or to a charity of your choosing.

To order memorial trees or send flowers to the family in memory of Andrew Michael Armstrong, please visit our flower store.