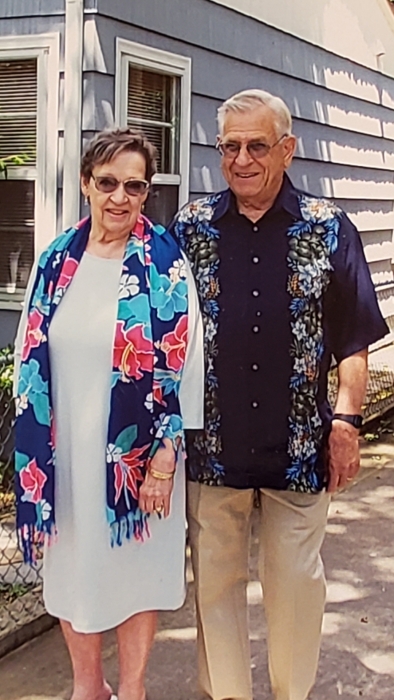 Bernard Martin Thumler, Jr, more fondly known as “Hap” (a nickname given to him by his grandfather, for being such a happy little fella), was granted his angel wings on Jan 17, 2021.

He was with family when he passed, and was showered with lots of love and care before his send off to be reunited with his beloved wife, Jane, his son, Wayne, his parents (Eva & Bernie), and many friends who went before him ... up in heaven.

He is survived by his & Jane’s children (Brenda, Barbara, Mike & Jimmy), his siblings (older brother, Don, little sis, Dorothy (Dottie) and baby brother, Evan), along with many grandkids and great-grandkids too. He will certainly be missed by many!

Hap was born on their family’s farm in Medford on May 2, 1929. He lived most of his life here in Southern Oregon.

Earning his pilot’s license at the young age of 16 was a pretty big deal for Hap! His brother’s also loved flying with him - they had some good times flying around the Rogue Valley together - going on grand adventures! Flying was such a love of theirs that Hap’s father built a hangar on their farm to park the planes in. Sundays were extra special because his pilot pals would all meet up at the family farm and they’d enjoy a huge spread of great food & drink put on by his mother, Eva. Many great memories were made and shared on that farm! His brother Evan said, “we all had a lotta fun growing up there!”

After graduating from Central Point High School, he enlisted in the Air Force, becoming both a hero and an aircraft mechanic, which only furthered his love for flying! Hap sure led an adventurous life! Not only did he love planes & flying, he also enjoyed the rodeo life, being a horse trader, bull riding, racing cars & riding motorcycles (as did his son, Wayne), and truck driving, which he retired from. He certainly was a hard worker, and a dedicated husband, friend and grandfather.

“We will miss him, a whole lot!” said his friends at the Weatherly Inn, where he lived for about the last year & a half. He was a unique individual who didn’t talk a whole lot in his final years, but he enjoyed sitting by the fireplace, sipping a cup of coffee (with a splash of cream) and being surrounded by a group of chatting friends. What a nice community of friends he was with there … thank you, Weatherly!

It is always a bitter experience to have to say goodbye to a special loved-one … but in this case, it gives the heart a smile to think of Hap cruising, flying or racing across heaven, with his wife, Jane, right by his side again!

Rest peacefully while enjoying being reconnected with all your loved ones who have gone before you.

Hap, you will forever be loved and missed!

To order memorial trees or send flowers to the family in memory of Bernard "HAP" M. Thumler Jr., please visit our flower store.