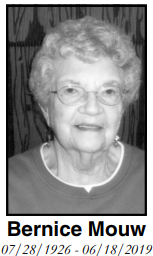 Bernice was born on a farm in rural Minnesota. She enjoyed working
outside doing chores. She married Wayne Mouw on Oct 19th, 1946.
While they farmed in the early years, they had their two children,
Sharon and Bill. In late 1950 the young family moved west to southern
California. They bought a house in Lakewood, where they lived for
30 years. In retirement they settled in Talent, Oregon. They traveled
in their motorhome to many campgrounds up and down the west
coast. It was always a treat to get a visit from Grandma and Poppo.
They enjoyed square dancing with the Star Promenaders and spent
several summers at the Diamond Lake Square Dance Festival. They
stayed in Talent until health issues had them move closer to doctors
and family in Medford. Wayne and Bernice were married 62 years
until the passing of Wayne in 2009.
Bernice will be remembered fondly by her two children Bill (Suzie)
Mouw, and Sharon Hogue, 5 grandchildren, Traci (Jeff) Thomas,
Tamara (Erik) Ilten, Wes (Val) Mouw, Jeni (Frank) Boisvert, and Chris
(Danielle) Mouw, and 11 great grandchildren. Bernice was a person
of service. She was very involved in her church family. She enjoyed
cooking, camping, square dancing, and baseball. Until late in life she
attended every event her great grandkids played/performed in. One
of her greatest accomplishments was her tremendous family dinners.
She loved to entertain and cook for the whole family. She could
regularly put together a huge dinner for many folks with everything
completed and hot at the same time. She will be remembered by her
family for her “cowboy” chocolate chip and molasses cookies.
Bernice passed away at home with her family by her side. Bernice
loved her Lord and was looking forward to this next step in her life.
She will be missed but the family can rest assured that she is sitting
with Wayne and Jesus.
Services will be held at Talent Friends Church on June 30th at 3pm.

To order memorial trees or send flowers to the family in memory of Bernice Mae Mouw, please visit our flower store.