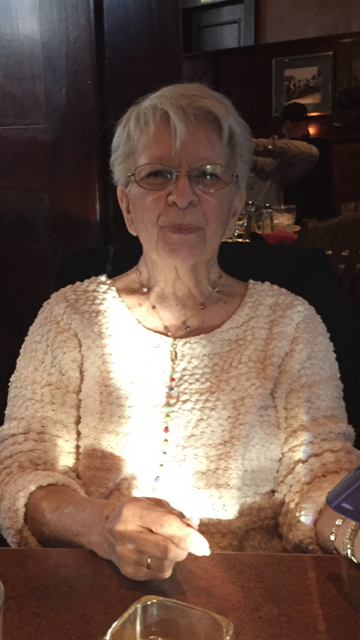 Brendalee Carpenter passed away on November 6, 2019 at Celia's House in Medford.
The youngest of 3 siblings, Brendalee Kelley was born in Mansfield, PA on March 27, 1940 to Irene and Henry Kelley.
She married at age 18 and accompanied her new husband Bill to Fort Stewart, Georgia where Bill was stationed in the US Army.  While in Fort Stewart, Georgia, she gave birth to daughter Pamela in 1959.  Brenda was an outgoing person, making friends where ever she went.  She worked as a radio personality known as Fe Fe La-Ru and executive assistant at station WEHH in Elmira, New York.
She gave birth to son Perry in 1961.
The family moved to Westfield, Massachusetts in 1971 where she worked as Executive Director for the Red Cross.  Bill's job transfer to California in 1979 brought Brenda first to Pleasanton and then Santa Cruz, California where she continued her career with the Red Cross and Hospice.  She was a terrific gardener and designer.  Brenda moved to Eagle Point, Oregon in 1998.  In Medford, Oregon, she volunteered weekly at the St. Vincent's DePaul Charity where she worked in the Thrift Shop, often bringing home many found treasures.  She will be remembered for her good humor and style and a smile for everyone.
She will be loved forever by her husband Bill, daughter Pam (Scott) Huber, son Perry (Kate) Carpenter, grandsons Casey, Ryan, Jason, Reese, and great grandchildren Brendan, Isabelle, and Violet.
Brenda will be laid to rest in the Veterans Memorial Cemetery in Eagle Point, Oregon.

To order memorial trees or send flowers to the family in memory of Brendalee Carpenter, please visit our flower store.