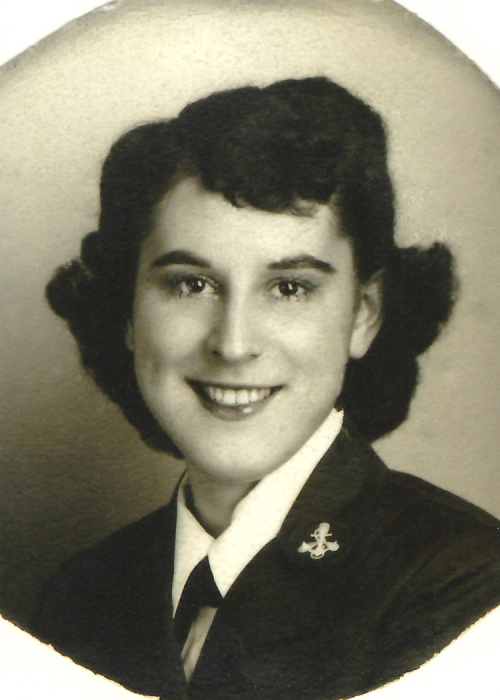 Charlotte  Carter, 97, died Wednesday, January 22, 2020,  at Faith Street Adult Foster Home, surrounded by her extended family. She was born June 22, 1921 to Peter and Hazel Gattemy in Greensburg, Pennsylvania. After high school she enlisted in the United States Navy, choosing the WAVES since she "looked better in blue than khaki" and the promise of "two new pairs of boots a year."  Charlotte was stationed in Washington, D.C. before being transferred to Pearl Harbor, Territory of Hawaii.  Chief Yeoman Gattemy was assigned to serve under Admiral Whitehead. There she ran the office, learned to drive, enjoyed beach parties, met her future husband, Tobe C. (T.C.) Carter (married November 19, 1945) and celebrated V-J Day.

The Carters made their home in Medford, Grants Pass and, ultimately, Klamath Falls.  While T.C. worked as a Safeway manager, Charlotte raised their two sons and worked at the Willow Tree Health Store.  Charlotte and T.C. owned various small businesses including a Dairy Queen and a myrtle wood shop. In the mid-1970s, divorced, Charlotte moved to Ashland, Oregon. Charlotte was a founding participant in the Ashland Food Coop, and an active member of the Unity Church. Charlotte's life was guided by metaphysical philosophies, the study of nutrition books and labels and the daily crossword puzzle. Late in life, she became a nanny to several very grateful families.

Burial will be held at the Eagle Point National Cemetery. Arrangements will be handled by Perl Funeral Home.

The family is grateful for the kindness of the Faith Street Adult Foster Home staff and Providence Hospice.


To order memorial trees or send flowers to the family in memory of Charlotte Carter, please visit our flower store.