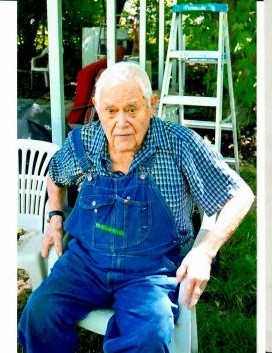 Dale Laverne Hinkle age 94 passed away peacefully Friday January 26 2018 at his home in Central Point, OR surrounded by his loving family. Dale was born September 21, 1923 in Hand South Dakota to Leonard and Grace Hinkle and was the youngest of two children, he Graduated from Gardena High School, Gardena California. He graduated on a Friday in June of 1942 and shipped off to the war on the following Monday in the United States Navy, where he served aboard the USS Mississippi from the summer of 1942- to the end of WWII. He was present in Tokyo Bay on September 2,1945 when Japan surrendered and soon returned home, where he spent the next year finding peace and solitude walking the entire pacific crest trail.

Mr Hinkle was a foundry worker in California until his retirement in 1980 when he moved to Central Point, OR, where he pursued his passion for landscaping and nature where “his park “ still stands

We will miss your sense of humor, kind nature, and all your stories that 94 years brought you!

There will be a private service held Thursday February 8th @ 1pm at the Veterans Administration Cemetery in Eagle Point OR.
With a celebration of life in the spring to be announced at a later date .
In Lieu of flowers, donations can be made to the S. O. Genealogical Society or S.O. Humane Society.
Perl Funeral Home & Siskiyou Memorial Park
2100 Siskiyou Blvd
Medford, OR 97504
To order memorial trees or send flowers to the family in memory of Dale La Vern HInkle, please visit our flower store.