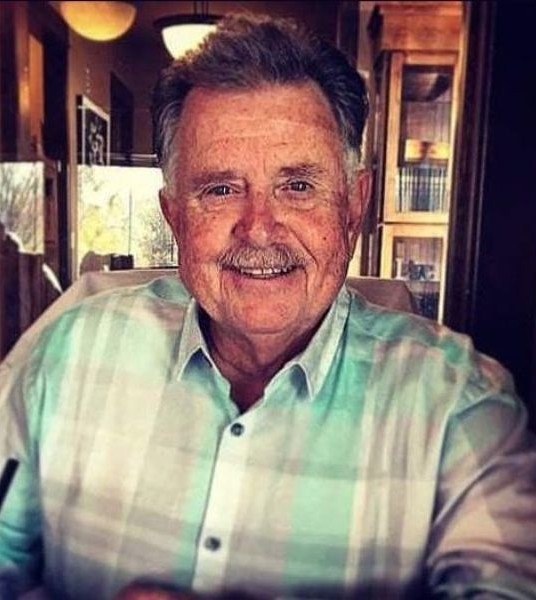 (His personality defied his age, almost 79.) His Mom, Margie and Dad, Ken were amazing folks. They were not born again when they moved to So. Calif.
Doug at the age of 12 had the privilege of leading them to the Lord. Good stuff, as Doug so often said. His home life was that of a “Leave it to Beaver” upbringing.
Doug came to know the Lord at the age of 8, at the knee of his gramma Fisher. (Never underestimate the influence of grandparents.)
Doug was a proud graduate of “Butt”, er, Butte Falls, OR.. Seventh in his class….out of 14. Doug would want you to know this.
Doug was actually bi-vocational. A Medical Technologist and a Pastor at churches in WA and Oregon. He was a lay Pastor at Table Rock Fellowship. He was loved by many in this role, Doug loved people more than words can explain.
We, Doug and I (well, Judy) were married on July 1, 1995 after dating for a year. The special ceremony was held along the Rogue River. (I was swept away.) Doug officiated and was, well, the groom. (Brags about having 2 signatures on the license.) Actually he had to get permission to marry us from the state.
Doug has 5 children: Kristen, grandchildren Priscilla, Evan and spouse Keatin, Nathan; greatgrandchildren Hunter and Aubrey; Jennifer and spouse Joe; Mark and spouse Kelly, granddaughter Maggie MayLyne; Greg and spouse Kimberly, Doug Jr and spouse Jennifer. Some of these treasured children are biological and others were “adopted” by his enormous heart. Sister Darlene and spouse Jamie and nephew Scott.
Doug was an “only child” until he was 13. Initially, he wasn’t sure why the folks had to have another kid. But then….the most precious sister, Darlene, was born. He loved her unconditionally. Then there was a time that she wouldn’t help him “pick up rocks” on the ranch. He always held that against her (wink-wink). Hey, she was only 3 years old.
In closing, one thing Doug would want you all to remember: asking Jesus Christ into your heart, personally, with sincerity, it the only thing that will make the eternal difference in your life.
Doug knows – he’s with His Father right now.
Much love, Judy

To order memorial trees or send flowers to the family in memory of Douglas Fisher, please visit our flower store.