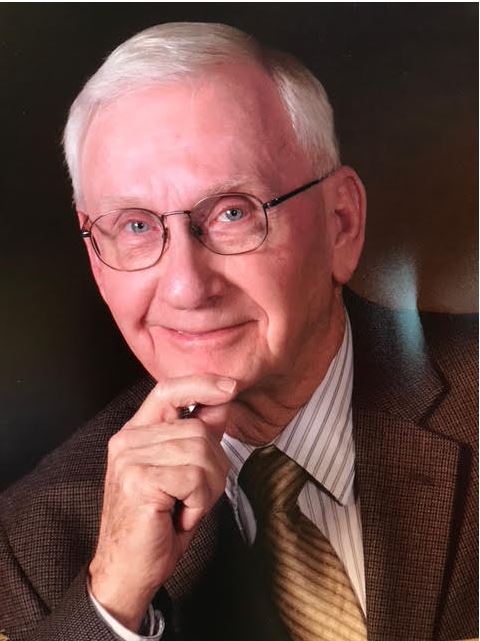 Gary Lee Blair, age 84, passed away on Friday, July 13, 2018 after a year-long battle with pancreatic cancer at his home in Medford with his three daughters by his side. He was born on July 1, 1934 in Artesia, New Mexico to Robert F. Blair and Pauline Marie Blair Bradshaw (Briggs). Gary attended school in Artesia, NMâ€‹ and went on to graduate from Eastern New Mexico University. On May 18, 1956 he married Patricia L. Ragsdell of Hobbs, NM. Together they raised â€‹their daughters Sharon Blair Stacy, Marcia Blair Legg, and Leigh Ann Blair Fankhauser in Medford. Gary and Pat divorced in â€‹1989, but remained friends providing a foundation for family gatherings and holiday celebrations with their girls and 6 grandchildren.  Gary’s beloved mother Pauline Bradshaw, his step-father Roy C. “Preacher” Bradshaw, brother Robert E. Blair and father Robert F. Blair preceded him in death. Gary enjoyed traveling, theater, music, and gardening. He adored his dogs Mutt, Buddy, Coco and Skipper. Gary had a beautiful â€‹baritone voice, and at one time he enjoyed singing with the Rogue Valley Chorale. As a Medford School District middle and high school English and Speech teacher, Gary inspired his students and gave them guidance to become effective communicators.  He was fortunate to correspond with many former students over the years who continue to express their appreciation for his work as teacher and mentor.  As coach of the school’s debate and speech program, he led several student teams to state tournaments where many earned high marks and honors over the years. Gary served in the U.S. Army as Staff Sergeant and was personal secretary to â€‹the Commanding â€‹Generaâ€‹lâ€‹ â€‹atâ€‹ Ft. Lewis, Washingtonâ€‹ in 1957-58â€‹. â€‹â€‹ His membership at Westminster Presbyterian Church over the years has provided him with community and strong faith. He is survived by his daughters Sharon, Marcia and Leigh and their children, MacKenzie, Charlie, Caitlin, Caienna, Sascha and Maia. â€‹The family is planning Gary’s Celebration of Life forSeptember 8 â€‹atâ€‹ â€‹Westminster Presbyterian Church, 2000 Oakwood Dr., Medford.  In lieu of flowers, donations in his name may be sent to the Rogue Valley Chorale Children’s Chorus 541-414-8309.â€‹

â€‹“Children are the only form of immortality that we can be sure of.”- Peter Ustinov

To order memorial trees or send flowers to the family in memory of Gary Lee Blair, please visit our flower store.