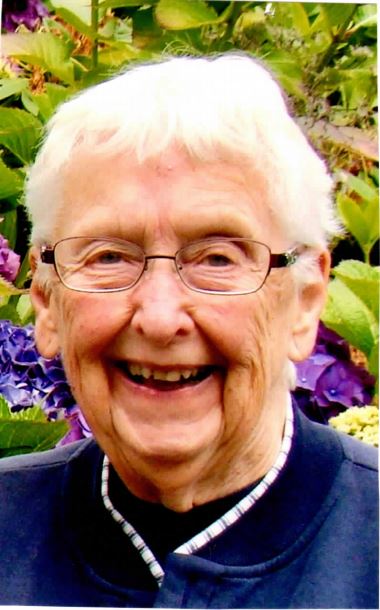 Gloria Joyce (Gaston) Luderman, 87, passed away Monday, March 19, 2018 of natural causes at her home in Medford. Gloria was preceded in death by her husband of 62 years, Ken Luderman, in September, 2017.

Born in Portland, the daughter of William and Eva Gaston, and raised in Seattle and Roseburg, she lived the last 48 of her years in Medford.

Until she was three years old, Gloria lived in several different towns and cities around Washington State as her father was a state auditor and moved with his work. Gloria’s mother had been a nurse up to her marriage, and she instilled a strong independent streak in her daughter that never waned. When Gloria turned three, her father was permanently stationed in Seattle. Gloria’s father died in November 1941, and after the Japanese attacked Pearl Harbor in December, she and her mother moved to Roseburg where her mother’s parents lived. She graduated in the class of 1948 from Roseburg High School. After high school, Gloria went to work for the telephone company, first as a local operator, then as a long- distance operator, and finally, after three years, as a supervisor.

Gloria continued working for the telephone company and had an active social life until she met her future husband. She chanced upon Ken Luderman, the first man she “ever fell for” in Roseburg on a blind date set up by friends. The couple eventually married in 1955, and Gloria left her position with the phone company to take on the responsibility of running a household. It was during these years in Roseburg when the couple’s three children were born. Ken was working for Interstate Tractor, which was taken over by Papé Brothers, and Gloria had a full-time job at home with the three children. By 1970, Ken was transferred to Medford, and the family moved away from Roseburg soon thereafter. Mrs. Luderman kept busy managing the family home, taking care of the kids, handling the family finances, and being the solid pillar of the family.

Gloria enjoyed her work. She stayed very active cooking, canning, pickling, and freezing the fruits of Ken’s prized vegetable garden. Gloria was a very accomplished cook. Gloria continued to be active socially, belonging to bridge clubs, bowling leagues, and getting together with friends over a glass of wine. Gloria and Ken were avid campers progressing from tents, to campers to a fifth wheel. They enjoyed their beach house in Brookings, Oregon and were active in a local RV club through which they acquired many happy memories. Gloria planned family and family-friend trips to Brookings and the Lake of the Woods, and as the family grew up, trips farther and farther afield became the norm. She traveled with Ken to many parts of the United States and to Europe, Asia, and South America.

A dedicated wife, mother, and grandmother, Gloria was universally loved by her family. An only child who lost her father at a young age, and never knowing her grandparents, Gloria placed a high value on family. Gloria always made sure that her family members’ needs were being met through her generosity. Her family always remained a focal point in her life; there were the annual family trips to Brookings each July, Thanksgiving dinners, granddaughters’ and grandsons’ weddings, and other family events that found Gloria directing, organizing, preparing, laughing, socializing, and loving those around her. She will be remembered as being a very sweet, kind, big-hearted person, and for her good humor.

A memorial service will be held at eleven o’clock May 18 at Ascension Lutheran Church, 675 Black Oak Drive in Medford with a private burial at Eagle Point National Cemetery, where she will be at rest with her beloved husband, Ken.

In lieu of flowers, please consider donating to the Alzheimer’s Foundation of America, alzfdn.org. Gloria had suffered from Alzheimer’s Disease for the last several years of her life.

To order memorial trees or send flowers to the family in memory of Gloria Joyce Luderman, please visit our flower store.