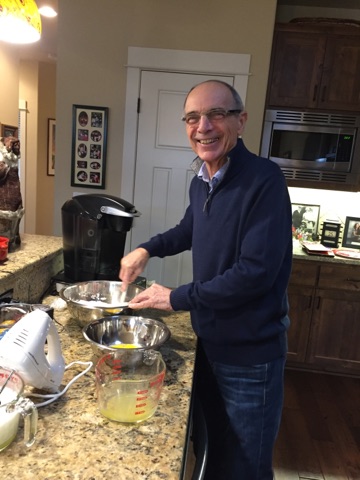 Jack was born Feb. 8, 1945, in St. James, Missouri, to Harold and Georgia Salter. In 1946, Jack’s family moved to Rogue River. He remembered fondly his days swimming in Evans Creek and working in the berry fields to pay for his school clothes.

“I look back on those days as some of the most enjoyable of my life,” he said.

Jack participated in football, basketball and track at Rogue River High School. He excelled in long distance running, finishing second in the mile at the state track meet as a senior in 1963.

He attended Southern Oregon College (now SOU) for one year before enlisting in the Army. He spent three years in the service, including two in Nuremburg, Germany. He joked his greatest claim to fame was being the driver of a mud-trapped jeep, which appeared on the cover of Stars and Stripes magazine.

After his honorable discharge, Jack re-enrolled at SOC under the GI Bill and majored in business. He renewed his interest in running. His senior year, the team qualified for a national cross country meet in Missouri and a national track meet in Billings, Montana. That year, Jack set the mile record at SOC.

Jack graduated with a Bachelor's in Business Administration in 1971. He joined Crater National Bank, working his way up to branch manager. His next job was with Jackson County Federal Savings and Loan, where he helped his firm through the Savings and Loan crisis in the early 1980s.

Jack held a variety of financial positions prior to retirement in 2010 as a successful investment broker with Shearson-Lehman Brothers, later known as Smith Barney Investments.

Jack married his wife, Judy, in 1983, both of whom brought children to their marriage, and along the way, many grandchildren. Jack found the time to take his grandkids camping and fishing, as well as teach them valuable lessons. His encouragement and motivation to those grandkids are now family lore.

Jack's cherished memories included trips to Europe and Arizona with his wife, a couple of trips to Canada with Barb and Don, and dear friends. There were many other family vacations. He also recalled trips with old buddies to Steens Mountain and weekly coffee meetings with friends.

Jack and Judy joined Bear Creek Church in Medford 18 years ago. It was there that his life changed from one of personal priorities to a renewed relationship with Jesus Christ.

“I always had these beliefs, but God was not an active part of my life. He's given me peace and contentment for who I am,” he said. “I have a large family and a lot of good friends who would do anything for me, I'm blessed.”

Jack was preceded in death by his parents Harold and Georgia Salter. He is survived by his wife, Judy, of 34 years; his son, Jake (Clarissa); his daughter, Ryley (Elgin); Lesa (Edwin) and Debbie (Bill) (who lovingly refer to him as their Step-Up Dad); his sister Barbara (Don); his brother Ray (Dianne); his mother-in-law Lorraine; several adoring grandsons and granddaughters, great-grandkids, nieces and nephews, and numerous extended family members, as well as many, many friends.

In lieu of flowers, please make donations to Joni and Friends, P.O. Box 526, Talent, OR, 97540, or visit the website at www.joniandfriends.org.   There is an option to give in memory of Jack Salter.

To order memorial trees or send flowers to the family in memory of Jack Salter, please visit our flower store.