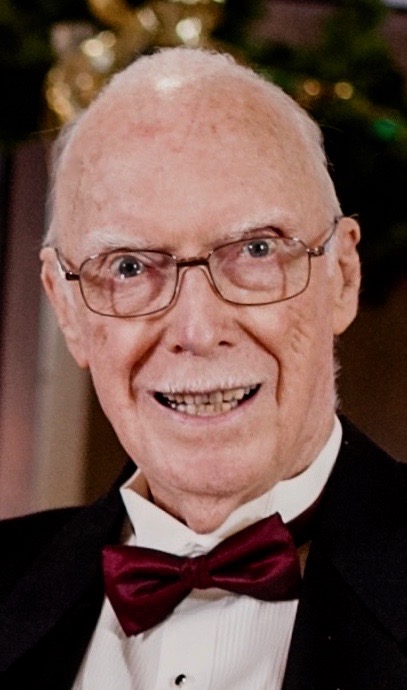 The longtime Horton Plaza resident/owner passed away peacefully Sept. 14  at the age of 92. Besides being a wonderful  husband, brother, father, grandfather and great-grandfather,  Larry excelled as a civic booster, philanthropist and senior housing visionary.
Larry's life well-lived will be celebrated at 2 p.m. Saturday, Oct. 6, at Perl Funeral Home, 2100 Siskiyou Blvd., Medford.
He was born  in the small town of Hanston in southwest Kansas. The second of four children of Gene and Retta Horton was known as Lawrence in his early years, but became Larry when the family moved to Portland in 1941.
Larry graduated from Franklin High School in 1944.  He spent his first year of college at Willamette University, hoping to be a chemist. He then joined the U.S. Navy and earned the rank of Electronic Technician’s Mate Third Class before being discharged in 1946.
Later that year he married Marty Cowles and  continued his college education at Oregon State, where he graduated with an electrical engineering degree in 1949.
The family grew to five with the addition of three boys in four years. Larry worked for Mountain States Power Co. and Pacific Power & Light in Albany and Portland before landing a position with California Oregon Power Co. in Medford in 1955.
Soon after moving to the Rogue Valley,  Larry  began his long affiliation with  charity fund-raising  and civic duty.  He worked on a Heart Association drive and served as president of a United Way campaign. He founded a breakfast Toastmasters Club and  became its president  and eventually area governor. That led to membership in the Medford Kiwanis Club, and in later years, White City Kiwanis (serving as president) and the Medford Rotary Club. There also was an eight-year term on the Medford Planning Commission beginning in 1961.
Larry's wife, Marty, passed away from a brain tumor in 1964. Spurred by a neighbor's suggestion, Larry dated Ann Wirkkula the following year and married her in August 1965. He adopted her two sons and the family grew to seven.
In 1966 Larry decided to leave PP&L, which had absorbed Copco earlier in the decade. He briefly  had his own consulting electrical engineering business before joining Ramic Corp., an electronics company.  Three years later, Larry moved to Marquess and Associates, where he advanced to partner before retiring in 1987.
Larry's interest in senior housing began with the development of six subsidized apartment facilities from 1970 to 1980. Beginning in 1991, he teamed with other investors to build eight retirement complexes in Medford, Grants Pass, Eugene, Central Point and Bend.
A passion for giving back to the community led to  creation of the Horton Family Foundation, which contributes to non-profit organizations. One of Larry's proudest moments was heading  the campaign to place an  ambulance at Crater Lake National Park.
It wasn't all work and no play. Larry and Ann traveled to every state except Alabama for genealogy adventures that took them to courthouses, libraries and cemeteries. They also found time to see the world on numerous cruises.
When they first married, Larry and Ann planned to play golf together, but cold, wet weather put an end to that. So they turned to sailboat racing and became champion competitors for the next 30 years, amassing 110 trophies and an unforgettable capsizing in San Francisco Bay.
Larry is survived by  his wife of 53 years, Ann; brother Dean (Beverly) of San Diego; sons Craig (Jane) of Medford, Stan (Nancy) of Portland, Chuck (Asia) of Medford,  Steve (Viola) of Portland, and Jerry (Jodi) of Gold Hill; 11 grandchildren; and 18 great-grandchildren.
The family wishes to thank all the caregivers and the Horton Plaza staff for their wonderful assistance.
In lieu of flowers, the family suggests donations to the Rogue Valley Genealogical  Society, 3405 S. Pacific Hwy., Medford, OR 97501.
Please visit perlfuneralhome.com to leave condolences.

To order memorial trees or send flowers to the family in memory of Lawrence Stanley Horton, please visit our flower store.