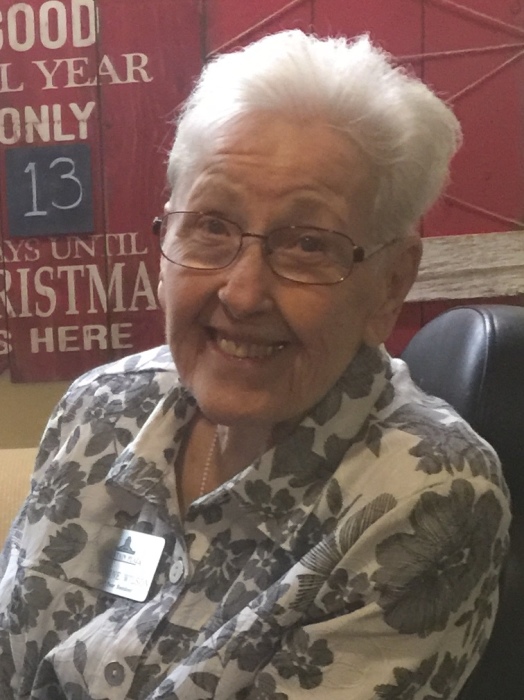 Lorraine Wilson
January 27, 1927 - December 21, 2019
Lorraine was born January 27, 1927 in Los Angeles CA.  She grew up on the piers of L.A. roller skating, which was her favorite past time.  She moved to Medford Oregon in 1945.  She met the love of her life Don Wilson in 1946.  It was a whirlwind romance.  They married December 31, 1946 after a 3 month courtship.  They had two children Judy Salter of Medford Or. and David Wilson of Brentwood Ca.  They lived in several places throughout Oregon.  They settled in Eugene, OR in 1951.  There they opened Wilson's Sausage Kitchen.  They later sold it to Sherm Olsrud and opened the lucky U Market in Oakridge Or.  In 1958 they bought a 60+ acre farm in between Bend & Redmond Or and began milking cows and later opened Wilson's Custom Cutting and Wrapping.  They moved to Bend Or  in 1989.  After the passing of her husband, Lorraine moved back to Medford Or. in 2003 to be closer to her daughter.  She moved into Fountain Plaza Retirement Community in 2005 where she lived out her remaining years.  She passed swiftly and gracefully in her home by the mercy of our lord Jesus Christ on December 21, 2019.  She was known for her smile, kindness and genuine interest in and for others.  She was loved intensely by her family; daughter, Judy Salter; son, David Wilson; grandchildren, Debbie Patton (Bill), Lesa Thornton (Jay); Jake Salter (Clarissa), Ryley Kvernum (Elgin) and 12 great grandchildren and 2 great great grandchildren and overabundance of extended family and friends.  She will be greatly missed also by her Bear Creek Church and Fountain Plaza families.  She was preceded in death by beloved Husband, Don Wilson, Sister, Wanda Davis and son-in-law, Jack Salter.  she will be remembered most for her unshakable faith in our Lord Jesus Christ.  In the front pages of her bible was written, "Mothers are to leave a road map to eternity for all their family."  She did this with the utmost grace and love every day of her life.
His Lord said to him, 'Well done, good and faithful servant; you were faithful over a few things, I will make you ruler over many things.  Enter into the joy of your Lord.'  Matthew 25:21
Please join us in remembering Lorraine on February 1, 2020, 2pm at Bear Creek Church 816 Black Oak Dr. Medford Or. (St. Mary's School)
In lieu of Flowers please make donations to:
Joni & Friends Oregon
P.O. Box 113 Jacksonville, Or  97530

To order memorial trees or send flowers to the family in memory of Lorraine Wilson, please visit our flower store.