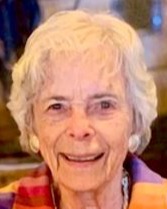 Marcia Berry Smith, age 92, from Medford, Oregon peacefully passed away on Friday, November 25th, 2022 after a prolonged illness. Marcia was a native Oregonian. She was born on February 6th, 1930 to George and Verna Berry in Albany, Oregon. Upon
graduating from Albany High School, Marcia attended Oregon State where she pledged Chi Omega. At a sorority activity, she met her future husband, Donald H. Smith. They were married in San Francisco, California in 1952 and shortly thereafter moved to
Honolulu, Hawaii while Don served in the Navy. This was just the start of their extensive travels as they would move often to various parts of the U.S. during Don’s career with the U.S. Forest Service, including stops in Oregon, Virginia, Utah, California
and Washington.

Marcia always found ways to serve as a volunteer and be active in the community and with her friends. She belonged to and was an tireless leader in many groups including: Girl Scouts, PTA, Garden Club, and PEO, just to name a few. Her willingness to help
others in need was exemplified throughout her adult life; she was someone who could always be counted on to get the job done. Marcia was also an avid cook, gardener, golfer, and bridge player and enjoyed traveling to visit her extensive family. Marcia was
a dear friend to everyone who knew her.

In addition to her husband, Donald of more than 70 years, she is also survived by her younger sister, Jacquelyn Sears (Max) from
St. George, UT, her three children: Stephen Smith (Karen), Camas, WA, Susan Lamvik (Bob), Sacramento, CA, and Sandy Nobles (Art) from Broomfield, CO. As “Grammy” to 11 grand-children and 28 great-grandchildren, Marcia was endeared by her family and
will be greatly missed by all.

A private family remembrance will be held later in the year.

The Smith family wants to thank Asante Hospice staff for their compassion and special care for Marcia during her illness.

To order memorial trees or send flowers to the family in memory of Marcia Berry Smith, please visit our flower store.