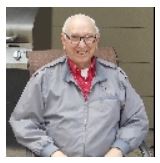 Melvin John Rennick passed away somewhat unexpectedly Tuesday, October 2, at home in Medford. Mel was born in Shenandoah, Iowa on July 22, 1930 to John and Elizabeth Rennick, the second of three children. He met Nancy Pettingill in Shenandoah and they married June 11, 1950. They had 2 children, Michael and Steven. They moved the family to Oregon in 1959 at the behest of his big brother Phil.

As a young man, Mel was actively involved in school football refereeing. For many years he was very involved in Barbershop Chorus, singing with the Rogue Valley Harmonizers. He loved music, he played trumpet in HS and in the National Guard.

He had a special place in his heart for bowling, spending many years in league activities. He also loved watching '49er football.

He worked 30 plus years in the plywood industry.

He was preceded in death by his parents, both siblings Connie and Philip, and is survived by Nancy, Michael (wife Peggy),and Steven, and his grandchildren, Amber, Celeste, Colin (Taylor), Molly (Charlie), and Brady (Erica), as well as 2 great-grandchildren, Jasper and Brooklyn.

To order memorial trees or send flowers to the family in memory of Melvin John Rennick, please visit our flower store.