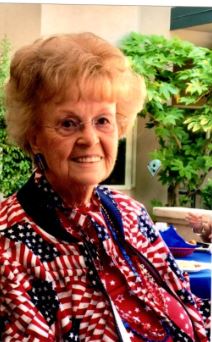 Dale Mattson, beloved wife, mother, grandmother, and GG passed away peacefully, surrounded by her family, at her home at The Springs at Anna Maria on August 8, 2018. Muriel Dale Caton was born on June 10, 1924 along with her identical twin sister, Maxine Gale Caton in Klamath Falls Oregon. Dale called the Rogue Valley area her home for most of her life. She also lived in Sun City West, Arizona for over 20 years. She loved and lived life spending time ice skating, snow skiing, water skiing, golfing and traveling. She was well known for her window and display decorating skills.

She was a long time member of the Rogue Valley County Club, the Beta Sigma Phi social sorority and Ascension Lutheran Church.

She is survived by her husband Wendell of Medford, her daughters Trudy Boteilho (Darrel) of Medford and Debby Endicott (Orval) of Eagle Point and Step children, Linda Marin (Charles) of Discovery Bay, Ca, Laurie Mattson of San Luis Obispo, Ca, and Eric Mattson (Susan) of White City;
7 grandchildren, and 8 great grandchildren, as well as numerous nieces and nephews.  She was preceded in death by her twin sister Gale on March 19, 2018.

A Celebration of Life was held on Friday, August 10th at The Springs at Anna Maria.

To order memorial trees or send flowers to the family in memory of Muriel Dale Mattson, please visit our flower store.