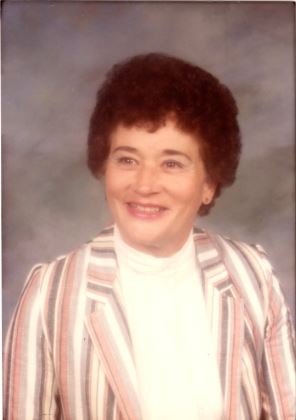 Pearl B. Rammin passed peacefully at her home in the early morning of Tuesday, August 21, 2018 with love ones at her side.

Pearl was born at Rogue Community Hospital on East Main, May 25, 1927.

She attended Medford Senior High, graduated in 1945. In her senior year she won the “Business Office Award.” Upon winning this award, she was offered a job with COPCO. She worked briefly for COPCO. In 1948 she married and moved to Riddle where she and her husband ran a small business. In 1952 she moved back to Medford with her two sons and went back to COPCO. Pearl worked hard and slowly began to advance. Her hard work found her in the position of Executive Secretary to the Manager of COPCO, Frank C Bash. COPCO then merged with PP&L where she became the Executive Secretary to Chairman of Board for PP&L, Glenn Jackson and District Manager/Vice President & Treasure of PP&L, Frank Bash. Pearl was always grateful to the many Quality Division Managers that she worked with in her 42 years of service.

Pearl enjoyed many hobbies, she loved working with her hands. She was a crafts person as a seamstress, tailor, knitter, and embroidery. During her high school yearsshe worked 3 part-time jobs, one of which was at the local skating rink, where she became impassioned with ice skating and became quite the accomplished skater. She also loved her 3 different Fox Terriers. In 1979 she and her husband Robert joined Rogue Valley Country Club, where they enjoyed a golfing membership for 31 years.

In 1961 she met Robert H Rammin while out dancing which immediately blossomed into 57 years of dancing around the world. Traveling to places like; China, Russia, India, Safari in Kenya, Japan, Germany, Italy and golfing in Bali. There was hardly a country that their dancing shoes did not touch the ground. Robert still tells the story about how he and Pearl brought the house down in Rio.

Pearl is survived by her sisters Winnie Jenkins and Jean Mahoney, husband Robert Rammin, her sons Dick and Dave Orr, grandchildren Tim, Chereen, Jonna and Erin. She is also survived by 12 great grandchildren and her Fox Terrier, Mackie.

The family would like to thank everyone for their loving support. Funeral services will be at Perl Funeral Home on Siskiyou Blvd at 2pm Tuesday August 28, 2018.

To order memorial trees or send flowers to the family in memory of Pearl B Rammin, please visit our flower store.