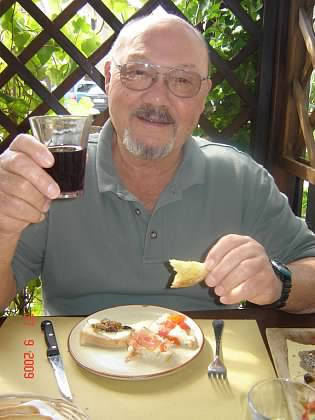 Ralph H Quincy, 81 years, of Medford, Or., passed away on June 13, 2020 at Celia's House in Holmes Park. Ralph was born in Los Angeles, California, in 1938, to Jean Stice Quincy and Ralph H Quincy Sr. He had three younger brothers. He was a motivated person even at the age of 6, when he sold fuschia starts from his little red wagon door to door. Ralph attended school in Carson, California, where he lettered in cross country track events. He became a proficient mechanic while fixing up his various cars, which included his beloved Austin Healy. Ralph was an Eagle Scout and was asked with others to represent the Eagle Scouts at the opening of Disneyland. Ralph joined the army in 1960 and upon discharge, became a firefighter for Los Angeles County.
Ralph moved to Oregon in 1972 and became a firefighter at Ashland Fire Department, and the Medford Fire Department from which he retired in 1993 as Battalion Chief. He loved being a firefighter and the people he worked with. He would say that when you love your job, you don't work a day in your life.
His joys were many. He loved adventures that involved the great  outdoors and nature. Ralph was a volunteer for Wildlife Images for 20 years, having formed the Wildlife Response Tea, with the guidance and support of Dave Siddon who died in 1996. Ralph also volunteered for ProvidenceMedivan which had provided free transportation to medical appointments. Ralph also volunteered for Providence Hospice for several years. He also volunteered for Food and Friends. Ralph loved hiking and backpacking, fishing, socializing with friends, playing tennis, and any adventures that involved airplanes.
He was invited to join renowned paleontologist Dr. James Martin twice to search for fossils at Fossil Lake, Oregon. After retirement, Ralph and his wife Nancy bought a winter condo in Treasure Cay, Abaco, Bahamas and spent 8 winters there enjoying new activities with new friends. In 2001 after a major hurricane hit the island home, it was decided to move on, and do some long anticipated "big trips". journeying to Switzerland, Alaska, a cross country 12,000 mile long road trip, Italy twice, Austria and Kenya, plus wonderful trips within the U.S. Ralph also was invited to put on Bird of Prey programs at a park in Japan, and a scientific trip to South Georgia Island. He also sailed on the schooner "Zodiac" in which the guests were also crew. Ralph was invited to be in a Disney IMAX film entitled Bird of Prey. The film was produced in and around Moab, Utah, and coincided with the end of the road trip which we called "The Road to Stardom". The film was never released, but he had a great time participating.Ralph will be remembered for his kindness, gentleness, strength, understanding, devotion to friends and family, compassion, empathy, positive regard for others, and his ever present jokes. He was a hard physical worker and a philosophical thinker. He was a true gentleman.
He is survived by his loving wife of 36 years, Nancy, and his daughter Suzanne Marie Quincy, whose mother, Barbara, predeceased her many years ago.
A celebration of life will be held sometime this summer or early fall.
In lieu of flowers, donations could be made to Southern Oregon Friends of Hospice Celia's  House, where Ralph spent his final weeks receiving excellent and loving care.  Arrangements will be handled by Perl Funeral home 541-772-5488. www.perlfuneralhome.com

To order memorial trees or send flowers to the family in memory of Ralph H. Quincy, please visit our flower store.