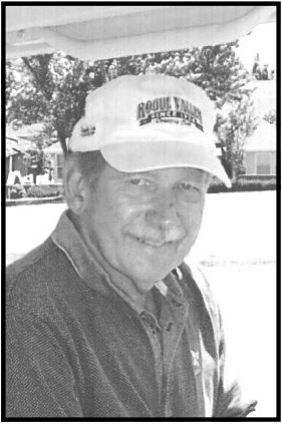 On the evening of February 3, 2020, Robert Leonard Zoll, age 81 of
Medford, Oregon passed peacefully at home surrounded by family
and friends after a long battle with Parkinson’s disease. Bob was born
on April 12, 1938 to Edgar and Julia Zoll in St. Louis, Missouri.
Bob began his career at McDonnell Aircraft in St. Louis as a
Tool Administrator. After his parents moved to Orange County,
California, he followed and was employed by Beckman Instruments
in Fullerton, California as a Senior Production Planner. Bob moved
to Southern Oregon and began his career with Bear Creek / Harry
and David. Bob worked as a Manager of Outside Packs, traveling
extensively throughout the United States. He retired in 2004 with 25
years of service.
On October 1, 1993, he married Judith Ivall in South Lake Tahoe,
Nevada. They shared many happy years together traveling and
playing golf.
Bob was a very kind, gentle and honest man. Everyone liked and
respected him. His passion was golf and he was a longtime member
of the Rogue Valley Country Club until he could no longer play.
Bob is survived by his wife Judith, sons Edward (Debbie) and Thomas,
siblings Mary Novak (Bob), Jim Zoll (Karen), Judy Grittman (Doug),
Danny Zoll, and Gary Zoll (Kathy) and five grandchildren. He was
preceded in death by his parents, Edgar and Julia, son Matthew, infant
brother Edgar, and his sister Jacquelyn.
Judith would like to thank Dr. Winter, Dr. Carlini, Providence Home
Health, Asante Hospice and Senior Solutions, especially Monique for
their wonderful care.
His funeral mass will be held at 8:30 a.m. Friday, February 14, 2020 at
Sacred Heart Catholic Church. In lieu of flowers, donations may be
made in Bob’s name to Asante Foundation.
“May God bless and comfort him in eternal peace”.

To order memorial trees or send flowers to the family in memory of Robert Leonard Zoll, please visit our flower store.