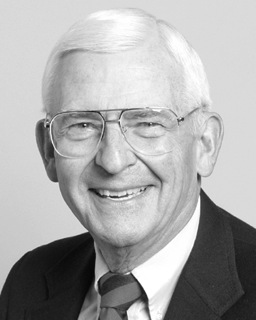 Vince was born on March 30, 1924 in the Bronx, NY to Vincent and Caroline (Burkhardt) Le Pore.  He was the son of 1st generation Italian and German immigrants. He grew up in Philadelphia, PA, and graduated from Germantown Academy in 1942 before entering the Service.  During WWII Vince was a member of the OSS (Office of Strategic Services) and served in the European theater. Recently, he was awarded the Congressional Gold Medal for Service in the OSS. After the war, he enrolled at Wesleyan University, Middletown, CT and was a member of Beta Theta Phi.  Vince also studied at the Wharton School of Finance in Philadelphia. For 30 years he was employed by Owens-Brockway in the glass container industry in California.  He was active in the Southern California Packaging Club, serving as President in 1970 and awarded the President’s Award for Exemplary Service in 1984. Vince was a Rotarian and served in various leadership positions.

Vince was devoted to his family and their activities.  For 20 years they were a 4-H family and Vince was an adult leader. Their children were involved in projects ranging from animals (horses, sheep, rabbits and beef) to clothing, woodworking and electricity. Vince served 4 terms as President of the North San Gabriel 4-H Leaders Council from 1969 to 1976. Boating and camping were favorite activities for the entire family.  Other passions were tennis, golf and politics. He was active in the Republican Party and served as President of the United Republicans of California in 1977.

In his retirement years, Vince enjoyed playing tennis until age 89 at the Rogue Valley Country Club. He continued his activities in politics serving as Treasurer of Jackson County Republican Central Committee and Republican Precinct Chairman. He was recognized for his service with the Bob Luther & Wally Iverson Award in 2006. Throughout his life, Vince was always active in his church, most recently at St. Peter Lutheran Church in Medford, OR.

He was known for his quick wit, great humor, his infectious smile, and his kind and compassionate spirit. Vince read two books regularly they were the Bible and the Constitution.  He was student of the constitution as it was written and carried a copy with him.

Vince was preceded in death by his father, Vincent, his mother, Caroline and his stepmother Wilma. He is survived by his wife Pauline, his three children, Leslie and her husband Tony, Vincent and his wife Sharon, and Elizabeth and her husband Jimmy, and his six grandchildren, Mark, Caroline (husband, Nick), Gabriel, Conrad, Brooke and Ashley.

A funeral service will be held at 10:30am Friday, November 2, 2018 at St. Peter Lutheran Church, 1020 E. Main Street, Medford, OR. Private burial will be at Eagle Point National Cemetery.

The family gratefully thanks the staff of the Rogue Valley Manor and Providence Hospice for their kind and compassionate care.

To order memorial trees or send flowers to the family in memory of Vincent James Le Pore Jr, please visit our flower store.